Look What You Did For Roussey 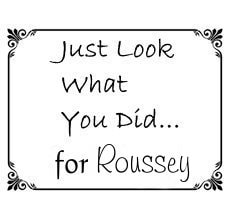 Roussey
A volunteer noticed that there was something off to the side of the road. On closer look, she saw it was a dog. A dog in really bad condition. With barely strength to stand, she was trying to eat a deer carcass. The volunteer got her into the car.  During the drive, it was a looming possibility that she might not make it. After arriving  at the vet, while on the exam table, it was said out loud ‘how is this dog even still alive?’ From outside the room, the vet tech said ‘because she is a fighter’.  It was from that moment, she got her name-it would be Roussey-from Ronda Rousey (tough-girl fighter). She was checked out, evaluated, and got the thumbs up that all things wrong, with time, would be most likely be ‘fixable’. She stayed at the vet for treatment of parasites and a first dip for her mange. The mange had surrounded one eye especially close. She would need care for both of her eyes during her recovery. She would need to build strength from being starved. After her stay of a few days, she was ready to pick up and take to the shelter. She was still so weak. We all watched for signs of improvement and she gave them to us. She was going to turn this all around. Everyday it was a little more noticeable just how much of a fighter she was. We came in--she would be standing! We came in a couple of days later--she would walk across her kennel. The next couple of days--she was making it down the back stairs. And of course, every dog lovers favorite milestone-a tail wag!! It is cause to celebrate and we did! When she started improving, she picked up speed with her recovery-eating her meals, walking small distances, barking a little, coming to us on her own,  and the best- learning to accept affection. She has been adding distance to her walks, going on car rides, making new friends, and growing some awesome fur! She is not all the way there yet, but there is no doubt she’ll get there. We have seen her fortitude. Roussey will soon be looking for her forever family.
​**If you would like to donate to the care of Roussey and others at the shelter, you can do that right from the home page of this website! Donations can also be made on the Ozark-Dale County Humane Society Facebook page via the blue DONATE bar (Paypal); mailed to ODCHS PO Box 2502 Ozark AL 36361. Thank you!

​UPDATE since original post--Roussey has healed from her physical wounds. She looks to her kennel at the shelter as a safe, secure place. At times, you can still see her apprehension with strangers. After all, it was a human that, somewhere along the way, was responsible for what had happened to her. Roussey is consistently a volunteer favorite.  It will be a great ending to her story for her to have a home where she can relax and have a family to show her how it is to be loved. Forever.