Look What You Did For Camille & Caroline 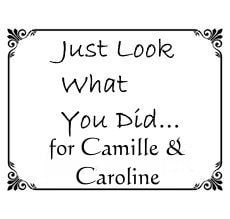 Look What You Did For Camille & Caroline

Camille and Caroline were dumped at the shelter on one of the coldest days in the Alabama winter. They were starving, in horrible physical condition, and scared. They were found huddled beside the trash dumpster. They were fed, then taken right away to the vet to begin treatment.  They responded well. While showing signs of improvement, Caroline seemed to be not feeling well. She was taken for treatment and also spay. While having her surgery, it was discovered that her insides were disfigured and filled with infection. Both girls had obviously been used repeatedly for breeding as well as having been abused in other unthinkable ways.  Caroline healed from her surgery. Camille was also spayed. It was not known if they were ‘related’ or not. It was, however, plain to see, that they were dependent on one another and had been through a lot together. They thrived at the shelter while receiving attention and love from staff and volunteers. It was obvious that they had a bond and it would soon be apparent how strong the bond was. Camille was adopted. She would dig out of the yard and was eventually returned to the shelter. She did not do that after she was back with Caroline. While volunteering,  a young man and his family fell in love and adopted them. Together! They had experienced the worst humans have to give.  Now they are experiencing the best, and they are getting to do it together!
​
​Update--Due to a life-altering situation, the family reluctantly had to return the girls to the shelter. After being back for a while, they were adopted again and returned a short time later. The world, at times, can seem unfair. But as the saying goes, it doesn’t matter how many times you get knocked down, it matters how many time you get up. Camille and Caroline are once again looking for a loving home where they can be together. It happened once, it can happen again!  Until then, thanks to supporters, they are being well-cared for...